On IBMi DB/2 is an integrated and integral part of the operating system and not a separate installed product, therefore you need to focus on which version of the OS/400 Operating System you have installed.  If you want to know more about DB/2 cross platform compatibility see this guide on the IBM site.

What is the latest version of AS400?

This is a question I still get asked. The short answer is IBM haven’t sold AS/400 for more than 20 years and the last AS/400 release must have been around OS/400 V5. Although many still call the system AS/400, IBM have evolved the system and first called it iSeries and more recently IBMi. IBM officially now call the Operating System “i” or “IBMi” but most still refer to the Operating System itself as OS/400 as the newer names are less than great. So if allowing for name changes, the latest version is 7.4. See my Introduction to IBMi / AS400 blog for more information.

How to get iseries DB2 version?

Please refer to the above couple of answers if you want to know more about iSeries DB2. 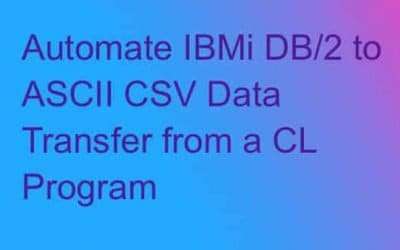