How to download / install and watch BBC iPlayer on Apple TV

I hope this answers your questions about getting BBC iPlayer working on your Apple TV. If you have any questions do please leave a message below and I will get back to you.

As of January 2022, the Apple TV App does not support subtitles. The BBC have said they are working on adding support to the app but there is no firm date on when this will be done.

Is BBC iplayer on apple tv?

Yes, the BBC iPlayer App is available on the Apple TV, and all other iOS based devices. Please see above for detailed instructions on how to find and install BBC iPlayer.

The BBC have released their iPlayer App for the Apple TV. This has a good well designed interface which is a pleasure to use.

Is there a BBC news app Apple TV?

At the time of writing there isn’t a separate BBC News App on the Apple TV, however the BBC iPlayer App on Apple TV includes BBC News (News 24). You can watch this live, rewind, pause and watch shows you have missed on the new channel.

Is BBC one on apple TV?

Yes you can watch BBC One live and shows you have missed via the BBC iPlayer App on the Apple TV. This page explains how to download and install the iPlayer App on your Apple TV.

Can you watch BBC on Apple TV?

Yes, you can install the BBC iPlayer App on Apple TV to watch all the BBC TV Channels in the UK.

How do I use iPlayer?

If you are in the UK you just go to bbc.co.uk and click on iPlayer at the top of the screen using any modern web browser. If you have a modern TV set bought in the last 4 or 5 years it will almost certainly also have the BBC iPlayer App built in. For this to work you need to have connected your TV set to your home wifi. You’ll then usually find an iPlayer, Menu or Online button on your remote controls. If your are outside of the UK then iPlayer isn’t going to work as it’s locked down to the UK. If you have a way to connect back into the UK via a VPN then you may be able to gain access that way.

As above you don’t necessarily need an App to watch BBC TV programmes on iPlayer if you have a web browser.
You may, however, want to install the iPlayer App if you have an Apple TV, Amazon Fire TV, iPhone, iPad or Android device. In all these cases you need to find the App Store icon on your device and then search for BBC. You should then find the BBC iPlayer App if it’s available for your device.

How to stream BBC iPlayer?

Please see above, How do I use iPlayer.

iplayer how does it work?

So how does BBC iPlayer work. Technically the BBC upload their TV and Radio Programmes onto central servers along with what they call metadata about these programmes. The metadata includes the name of the programme, the date of transmission, channel and the dates it is to be available online.
The demand on BBC iPlayer is so great that at times it accounts for the majority of the internet traffic in the UK. The system is designed to cope with this level of demand by being highly distributed and highly integrated into the UK Internet backbone. This means that content is cached on servers within each of the major broadband providers and in various regional content distribution network hubs.

How long before iPlayer updates?

This varies from programme to programme, but generally I find programmes are there 30 minutes after they were shown live. Pre-recorded programmes can go live on iPlayer the moment they start to be transmitted on air. On some devices now iPlayer supports watching live programmes from the start. Other times it seems to take days for programmes to go live on iPlayer, this is usually for rights reasons rather than technical reasons.

BBC iPlayer does not work?

This is almost certainly a problem with your set-up rather than iPlayer itself. This is such an important platform now in the UK that an outage would probably make the headlines on the News at Ten.
If it’s not working then first check your connection to the internet is working by trying other online apps. If this works OK then try switching off / rebooting your device. If that still fails then see if your device/TV has an option in the set-up menu to ‘refresh internet content’. This can sometimes fix TV’s on which iPlayer hasn’t been used for a long time and the version of the iPlayer app in the device is out of date.

Yes, you can use AirPlay with iPlayer from an iPhone or iPad, however if you have an Apple TV I recommend you just install the BBC iPlayer App, it’s brilliant and much better than using AirPlay. See above for details of how to download and install the iPlayer App.

If you are using a web browser on a PC or laptop it does support downloading programmes so that you can watch them offline. However these are still subject to digital rights management (DRM) and will not be accessible after a number of days, typically 30 days.
There is no legal way to download video from iPlayer outside of the BBC’s rights management system and keep it forever as we used to with VHS and Beta video recorders.
If you are desperate to keep a programme for some reason then it may be possible to use screen capture software on your laptop to record and save locally for your personal use. If this works at all then expect this loophole to be plugged when you upgrade your Operating System at some point in the not to distant future.

Do you need internet for BBC iPlayer

Yes, you do need an internet connection to use BBC iPlayer. Some versions of the BBC iPlayer do allow you to download programmes for a few days so that you can watch them offline later.

Do you need WIFI for BBC iPlayer on tv?

You need a connection to the Internet to use BBC iPlayer. The internet connection can be via a WiFi network. If possible you will get better results if you can run an ethernet cable from your broadband hub to your TV or media player as this is less likely to be affected by interference.

No, please see the above questions which discuss accessing iPlayer from outside the UK.

How to Get iPlayer

If you don’t already have iPlayer you may be able to download it onto your existing devices – please see above. If you have a TV set which is less than five or six years old it is also likely that it includes BBC iPlayer or has it’s own App Store from where you can install iPlayer.

How to watch BBC iPlayer on tv?

Many modern TV sets have the BBC iPlayer App built in. If yours doesn’t then you can use devices like the Apple TV to add iPlayer and many other services to any TV set with an HDMI connection. If you have a laptop with iPlayer you may also be able to connect this to your TV. Many laptops have HDMI outputs and many TV sets have a VGA input. It is hard to give specific advice as peoples set-ups vary so much. If you have a detailed question please leave a question below.

How to watch live TV on BBC iplayer?

From within iPlayer select the channel you want to watch. You should then see detailed the currently live programme and have options to watch that, watch live or watch from the start.

The iPlayer App itself is free to download but you do need a BBC TV License to watch programmes legally.

If you have a question I haven’t covered above do please get in touch and I’ll do my best to answer it for you.

← Prev: The Philosophy of Project Management 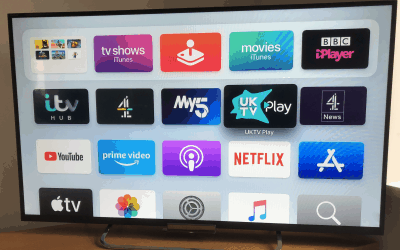 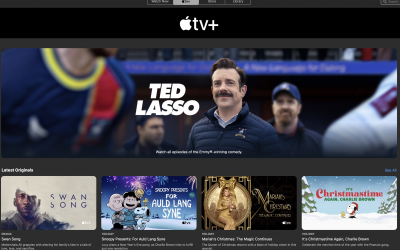 Apple TVPlus or (Apple TV+) is Apples subscription TV Service. It was initially only available on Apple devices but in... 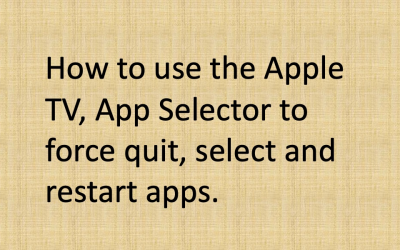 Apple TV How to force quit an app

Why would I want to force quite an App? This article explains how to close, force quit and restart an app on your...