The idea of electronic paper and notebooks has been around for many years. Most famously Captain Kirk is seen using PADDs (Personal Access Display Device) in Star Trek over fifty years ago. Steve Jobs must have been inspired by this and I think he used ‘pad’ in the name as a reference to the PADD’s in Start Trek. 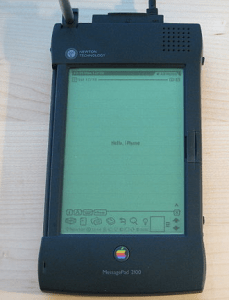 The iPad launched by Steve Jobs wasn’t however the companies first attempt at this type of device. The Apple Newton was launched in 1993. It was way ahead of its time and maybe overly ambitious. It did however lay an important keystone of the foundation for the iPad and iPhone. Apple in the 90’s needed a state of the art, low power, fast CPU. It happened that Acorn in the UK had designed such a processor for their BBC Micro, initially as a co-processor and later as the next generation BBC Micro known as the Archimedes. Apple bought into it and licensed the design which became the A Series processes used today in all Apple mobile devices, and Acorn became ARM and their CPU design powers billions of devices around the world, none of which might have happened had Apple not invested in the early days.

These are my blogs about the Apple iPad. I think it’s a brilliant device and I’ve been using it since in was launched and my children use them now for homework and games and music and so much more. It’s interesting to see them grow up and use iPads as if they have always existed and naturally use Siri for everyday tasks.

It's often useful to keep an eye on what's trending on Twitter but in the latest versions of the iPhone Twitter App it's not immediately obvious where to find what's trending. It's actually really simple when you know. At the top of your timeline screen just under...

For some reason after upgrading my iPhone to iOS 5.1 I was unable to wirelessly sync with my Mac which is running the latest version of Lion.  I tried Googling the error code and could not find and real solution anywhere.  In the end with a little trial and...

On June 6th we'll finally get to hear Apple's next batch of announcements.  This time it has been a little different.  Normally Apple are very secretive and there is no official word in advance about what is going to be announced but this time we've seen several press...